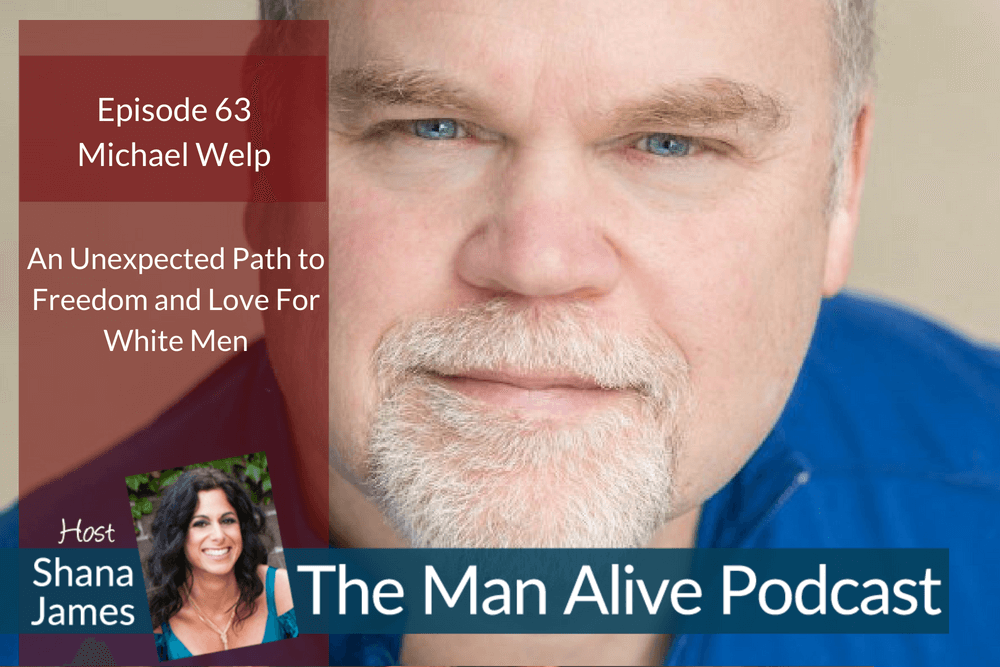 Freedom and love for white men…what? White men are often blamed for many things, including lack of diversity in the workplace. Michael Welp sees beyond stereotypes and blame. He supports white men to become full partners in diversity, while also liberating them from the limitations of “Male Culture” that cause suffering and isolation.

It makes me nervous to single out white men, but bear with me. I’m doing it supportively, not as an attack.

White men are often blamed for many things, including a lack of diversity in the workplace.

I see each man as an individual and believe you deserve to be known as the unique man you are.

But what do you do when you are viewed as a perpetrator or contributor to others’ struggles? And how can you use your power to create more good in the work place and in the world, without claiming that what’s happening is your fault?

Michael Welp has a powerful answer.

Michael is a dear friend and colleague who created a company called White Men As Full Diversity Partners. He has supported white men for decades to support diversity, while also liberating them from the limitations of white male culture that cause suffering and isolation.

It may not yet be obvious how these two topics intersect but Michael explains how white male cultural beliefs such as Rugged Individualism, Rationality over Emotion and Status & Rank over Connection, create pain and isolation for men too!

Michael has led his trainings at well-known companies around the world with incredible results. In this conversation we cover…

After spending time in South Africa right after apartheid ended, Nelson Mandela became one of Michael’s inspirations. He wrote a letter saying he was astonished to see Mandela released from prison, after 27 years, embracing the white men who imprisoned him.

“You showed that love is the greatest force for change,” Michael wrote. “I want you to know it’s the same thread of love I carry that you passed on to the white men in South Africa.”

Michael has inspired me for years and I think this conversation will both inform and inspire you too.

Michael Welp, PhD. is a co-founder of White Men as Full Diversity Partners (WMFDP), a US based leadership development consultancy. For 20 years Michael has led pioneering workshops engaging white male leaders and building leadership skills to create cultures of full inclusion. He focuses on how to engage white men to become more passionate advocates for inclusion and how they can partner better with women and across cultures. His company WMFDP also engages men as gender equity advocates worldwide.

Earlier in his career Michael facilitated interracial team building with over a dozen South African corporations, in his work with Outward Bound. Following this, his research on how white men learn about diversity led to founding WMFDP.

Michael is the author of the recently published book, Four Days To Change: 12 Radical Habits to Overcome Bias and Thrive in a Diverse World. His TEDx talk, posted on You Tube, is entitled White Men: Time to Discover Your Cultural Blind Spots.

Michael is a certified facilitator of circling and authentic relating and lives in Sandpoint, Idaho with his two teenage daughters.